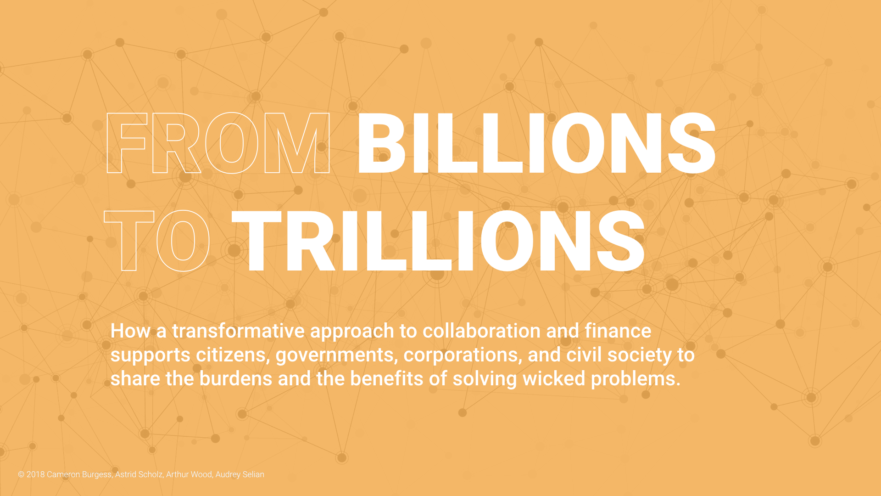 Yet despite this vast commitment there remains an estimated $50 trillion funding gap required to address the Sustainable Development Goals (SDGs, or Global Goals) – the most comprehensive, cohesive and coherent description of these wicked problems to date.

The existing approach presumes that a multitude of entities addressing some part of the greater challenge will, without appropriate incentives and mechanisms, self-organise themselves into effective, efficient, and scalable solutions. This is dangerously and wilfully naive. By comparison, the International Space Station (ISS), the largest multi-lateral project, and the single most expensive construction project in history, came at an estimated cost of only $150 billion. The ISS would never have been launched without clearly defined incentives, and a coordinated pathway to success – so what makes governments, corporations, and civil society actors believe they can solve trillion dollar problems through a piecemeal, incremental, fragmented approach?

In June 2017 I co-facilitated, with Linzi Fidelin of Sphaera, a design thinking workshop called ‘Scaling Solutions’, hosted by the Rockefeller Foundation in New York. The participants included representatives from some of the largest and most active funds, foundations, development finance institutions, entrepreneur networks, and impact investment groups. In framing the day we asked “who is at least 5% convinced that the SDGs will be achieved by 2030?” Of course, every hand in the room shot up. “10% convinced? 15%?”

As we increased in 5% increments, the hands started to drop. By the time we hit 50%, every hand in the room was down.

Here in a room of some of the better informed and most active organisations working to resolve the global goals, there was consensus on many things – the two most obvious being:

In fact, over the past three years as a group of us collaborators and co-conspirators (including Astrid Scholz — Sphaera, Audrey Selian — Artha Networks, Arthur Wood — Total Impact Advisors, and myself) have worked alongside and within these organisations — from Portland, to Geneva, from San Francisco to the Senegal River Basin, from New York to New Delhi — we have discovered that, when pressed, the response is essentially the same.

We beg to differ.

On the face of it, the bottom line is depressingly simple – there is no single entity with either the cash or the capacity to invest or deploy the requisite capital to achieve one, let alone all, of the Global Goals. And there are currently no incentives rewarding outcome over effort, or mechanisms for collaboration at the scale necessary to actually solve the SDGs.

Further, the normative behaviours of markets have become the modus operandi for any venture seeking to catalyse beneficial change. We use the patronising language of ‘beneficiary’, or the mercenary language of ‘customer’ to define the human individual we are seeking to serve. In our failure to acknowledge that every human person is a citizen of the world – imbued with fundamental sovereignty and agency – we perpetuate the Industrial Age metaphors, models and missions that got us into this mess in the first place.

That the funds deployed through most modern philanthropy, development finance, aid programs and yes, even impact investment, are the result of, and often the unwitting perpetuators of, vast inequity, is clear, and has been expounded upon at length in recent times.

Even if we were able to make peace with this conflict — which, quite frankly, we shouldn’t — and while there is no denying that the increase in the deployment of both public and private capital towards solving these wicked problems is to be lauded, with an annual funding gap of between $1.7 and $2.5 trillion, it’s clear that investments of billions, or even hundreds of billions, are simply inadequate.

In fact, a rough back of the envelope calculation indicates that we need to mobilise roughly 5% of all global capital to achieve the SDGs by 2030.

In this challenge, however, also lies the opportunity: the constellation of entities working to address these issues require financial incentives, operational infrastructure, and no small measure of humility, to transition from organisation-centric behaviour, to mission-centric behaviour.

From our perspective, this is the only way in which human society will move from treating the acute problems the SDGs represent, towards the systemic resolution of the underlying chronic issues.

We believe that not only can we solve the SDGs by 2030, but that we must. Further, we believe that the primary impediment to their resolution is rooted not solely in resources, technology, or intent, but primarily in a combination of ineffective systems design, and intransigent human behaviour driven by short-termism, fragmentation, and counterproductive incentives.

Today we are launching a concept paper: From Billions to Trillions:
How a transformative approach to collaboration and finance supports citizens, governments, corporations, and civil society to share the burdens and the benefits of solving wicked problems. We invite you to download it, read it, comment on it, and get in touch with us with your reactions, thoughts, and ideas.

This document is the distillation of decades of combined thinking and acting in service to global change. Rooted in philosophy and practice, this document is a roadmap we have already begun executing against. We are working in partnership with a number of organisations who agree that systems change, underwritten by a global digital and financial infrastructure, is the missing element necessary for not only the resolution of the Global Goals, but for each successive wave of global issues that humans will continue to face as we continue to evolve.

As the saying goes, it takes a village to raise a child. And here we are, one village, 7.6 billion children. No matter where you live, what you do, or what you believe, we are all united in this great work. Peace, security, and dare we say it love, are both the drivers and the result of more effective connection, collaboration, and co-creation.